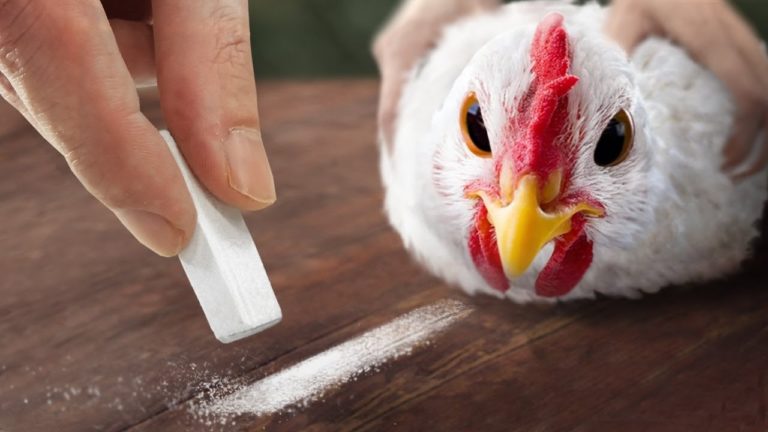 The susceptibility to hypnosis in animals is different: if the chicken is exceptionally submissive, then the dog and cat are reputed to be very obstinate patients. See how easy it is to hypnosis chicken at home:

Experiments were carried out to induce a hypnotic state in animals prior to similar experiments in humans. As early as 1646, the Experimentum mirabile de imaginatione gallinae, presented by the Jesuit father Antanasius Kircher, took place in Rome.

This famous experiment became the basis of many techniques that were subsequently applied, and its interpretation raised important theoretical questions that are still discussed today. Therefore, it is worth describing it in general terms.

The chicken with its legs tied is placed on a board on its stomach or on its side. When she calms down after a period of arousal, a chalk line is drawn on the board from her beak. If she then untie her paws, she will remain motionless (see picture).

To “wake up” the chicken, it must be slightly hit or make some noise. According to Kircher, the chicken calms down from the moment when, seeing the futility of its efforts to free itself, “obeys its winner.” When the latter frees her, she continues to remain in place, since her vehemens animals imaginatio perceives the trait as a bond, confusing her.

Thus, Kircher, referring to the fear, resignation and imagination of the chicken, gives his explanation a kind of psychological orientation, which was picked up by numerous researchers and turned out to be fruitful in the interpretation of hypnosis in humans.

In the animal world, cases of hypnosis are observed outside of any experiment. Some invertebrates, under certain conditions, fall into a state that resembles catalepsy, for example, spiders when fixing a strong light on its web. However, some animals can hypnotically affect others. In some species of large spiders (the phalanx of the Caspian and Turkestan – Galeodes caspicus turkestanus) described by Heymons, the female tries to devour the male while he is courting her.

To perform copulation, the male hypnotizes the female by sticking his hooks into her abdomen. After the performed act, the female attacks her partner, less strong than her, but more agile. It is thanks to his agility that the male often manages to save his life. Finally, it is well known that rats and birds are hypnotized (sometimes mutually) by snakes.